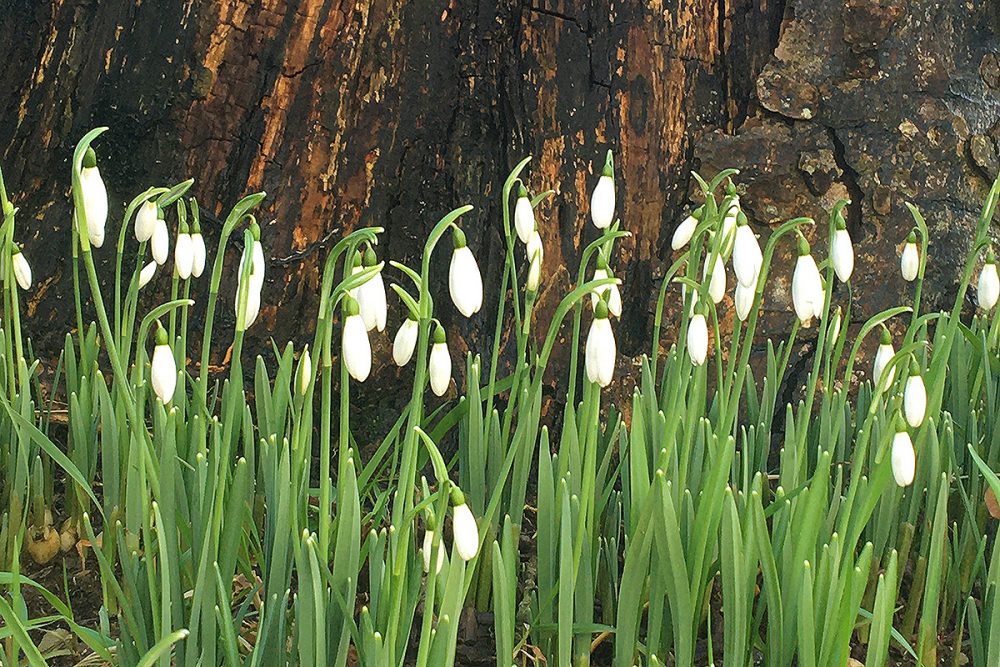 As storm Brendan leaves us, the ever-resilient Snowdrops are amassing like rows of tiny stormtroopers ready see off the winter. Now, I was nervous about likening these beautiful delicate flowers to the Star Wars commandos but then I read that the Stormtroopers are fanatically loyal elite shock troops who wear imposing white armour, equipped to allow them to survive in almost any environment.  What a wonderful analogy for the utterly reliable way the snowdrops turn up before any other sign of spring and can cope with whatever conditions they find.

I have come across a couple of delicious and more romantic creation myths about snowdrops. The first from a fairy tale by Stella Mead from the 1920s tells how the fairies weren’t allowed out of fairyland until spring but one nosy little gang wanted to see the world in winter. They snuck out for a peak but were caught by Jack Frost who turned them to flowers as punishment. He eventually let them go home but only if they spend a few weeks every year in our world as the flowers we call snowdrops.

Another story tells of a compassionate angel leaving a little clump of snowdrops as a symbol of hope for Adam and Eve when they had just been banished from the garden of Eden.  This tale is captured in a poem by George Wilson (1818-59), these few misquoted lines capture the essence:

And though the leaves seem dead,
Yet once again the smiling Spring,
With wooing winds, shall swiftly bring
New life to every sleeping thing;

And thus the snowdrop, like the bow
That spans the cloudy sky.
Becomes a symbol whence we know
That brighter days are nigh;

I adore the image of snowdrops being like rainbows. Snowdrops are so unassuming, heads bowed, simple white and green and yet the first one I see every year makes me smile and lifts my heart equally as well as a rainbow in a downpour.

So, whether you like your mythology ancient or futuristic, the Snowdrop is an enduring symbol of ‘brighter days’ and spring does come early in Cornwall.  If you fancy using Helsbury Park as a base to explore the magnificent gardens of Cornwall there are plenty to choose from.  One of our nearest, dog-friendly gardens is Pencarrow House between Bodmin and Wadebridge, they open specially in February to give the public the opportunity to see their wonderful snowdrops. Snowdrop Sundays for 2020 will be on the 9th February and the 16th February.