Another great night was had by all, we really enjoyed it and as always met some more lovely people from Cornwall’s tourism sector. The new format of the awards with 3 prizes given in each section definitely works well with everyone present sharing in the success of the sector as a whole. It also means more people make it onto the stage, this year to meet Kirsty Allsop who was excellent as the guest of honour. The overall feeling at the awards is very much one of mutual appreciation and a celebration of a lot of hard work. And as we also came to realise on the night an awful lot of investment, we thought we’d put a lot in with the development of our pool but it was a drop in the ocean when compared to some of the gold winners. It’s reassuring to know that many other businesses also believe it is a sound strategy to invest in tourism in Cornwall, but the scale of the investments, tens of millions in some cases, is quite staggering.

Our first award came in the sustainable tourism category, we knew we were a finalist and had high hopes but we were first up and collected the bronze. However, we were pipped by two amazing businesses, Bedruthan Steps who are pretty much the flagship business in this subject not only in Cornwall but in the UK, and also to Rosehill Lodges which is a brand new development of eco-lodges who are clearly planning to specialise in this sector for many years to come. So for a small business like ours, with a traditional farm environment with all the legacy issues that brings with it, to make it to the final three was some achievement. With our other plans for taking the business into micro-generation and HLS we now know that we’re on the right tracks. 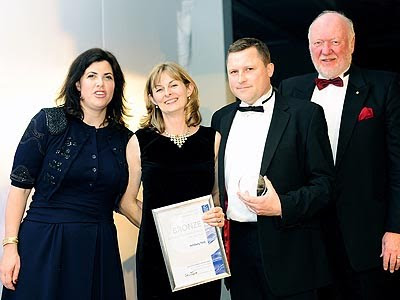 Our second came in Self Catering Establishment of the Year, in which we were told (again) that the standards were incredibly high and the decision was extremely tight. This is one of the awards, like Large Hotel, which is slightly cyclical and we knew that having won last year it was unlikely that we’d pick it up again. However we were a little disappointed to only get a bronze in this section but in retrospect and taking into account the changes that our sector is going through we have to accept that making it to the finals is a huge achievement in itself. The Gold winner has published pans to spend £35m on its posh holiday park, clearly this is something that will be difficult to compete with in future. It may pay Visit Cornwall to break the self catering category up next year; separating out lodges from cottages and also from apartments as the market for each is quite different. It is a bit odd to lose out to someone in a self catering award who has a restaurant!

No complaints from us though, the Visit Cornwall PR machine has been at work and we’ve been featured in all the key publications as well being interviewed for local BBC radio which we very happy about. So all in all another great experience.