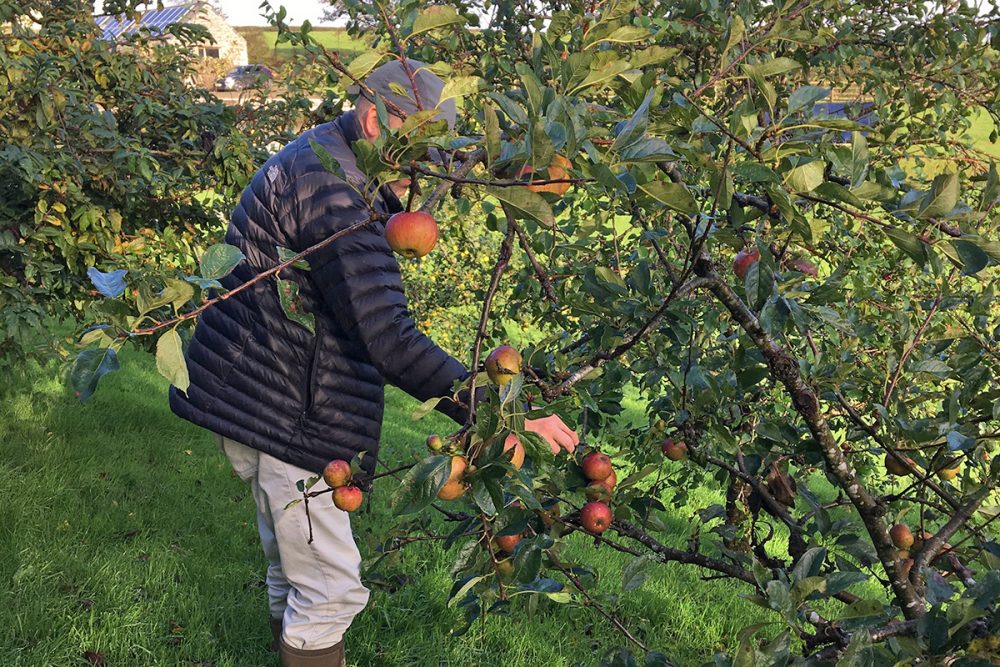 Apples are a big part of autumn around here., we planted our little orchard at Helsbury Park about 10 years ago using mainly traditional Cornish varieties and this year has given us our best harvest yet. Originally from Asia, apples came to Britain with the Romans. The National Fruit Collection at Brogdale in Kent has over 2000 varieties, although there are around 7500 varieties worldwide.

Not having our own apple press, we were lucky to find an Apple Day not too far away in Linkinhorne on the other side of the moor. Apple Days were started in 1990 by an organisation called Common Ground at a launch event in Covent Garden. Their aim was to promote local distinctiveness and many Apple Day events now take place around the country. Locals gather to press their apples and process them in cooperative groups.

It was fascinating to see our apples scratted into pomace, built into cheeses in the press and watch the must flow.  That’s chopped up, piled in hessian bundles and squeezed ‘til the juice ran out in lay terms!

The word Wassail comes via the Old English “was hal” from an Anglo-Saxon greeting meaning “be you hale” or “be healthy” this makes me smile as it reminds me of the Cornish greeting “wasson” which loosley means “what’s up?”

Apples are also an integral part of the Cornish festival of Allentide or Kalan Gwav in Cornish “the first day of winter”. The Celtic day began and ended at sunset so Allantide begins on the evening of 31st October and continues through the day on November 1st.  In Celtic mythology apples were associated with the otherworld and immortality and there are many similarities between this festival and Allhallowtide, Hallowmas and Halloween.  Big shiny red apples are given to children, friends and family as good luck tokens and of course there are bonfires and apple based games.

So why not go apple bobbing, put an apple under your pillow to dream of your future spouse or throw an apple at someone to say “I love you”. This last one is from ancient Greece and if the ‘target’ catches it it means your feelings are reciprocated.  Of course you could just light the fire and make a crumble! Our apples are now bubbling away nicely and we’re hopeful for cider in time to do some Wassailing.